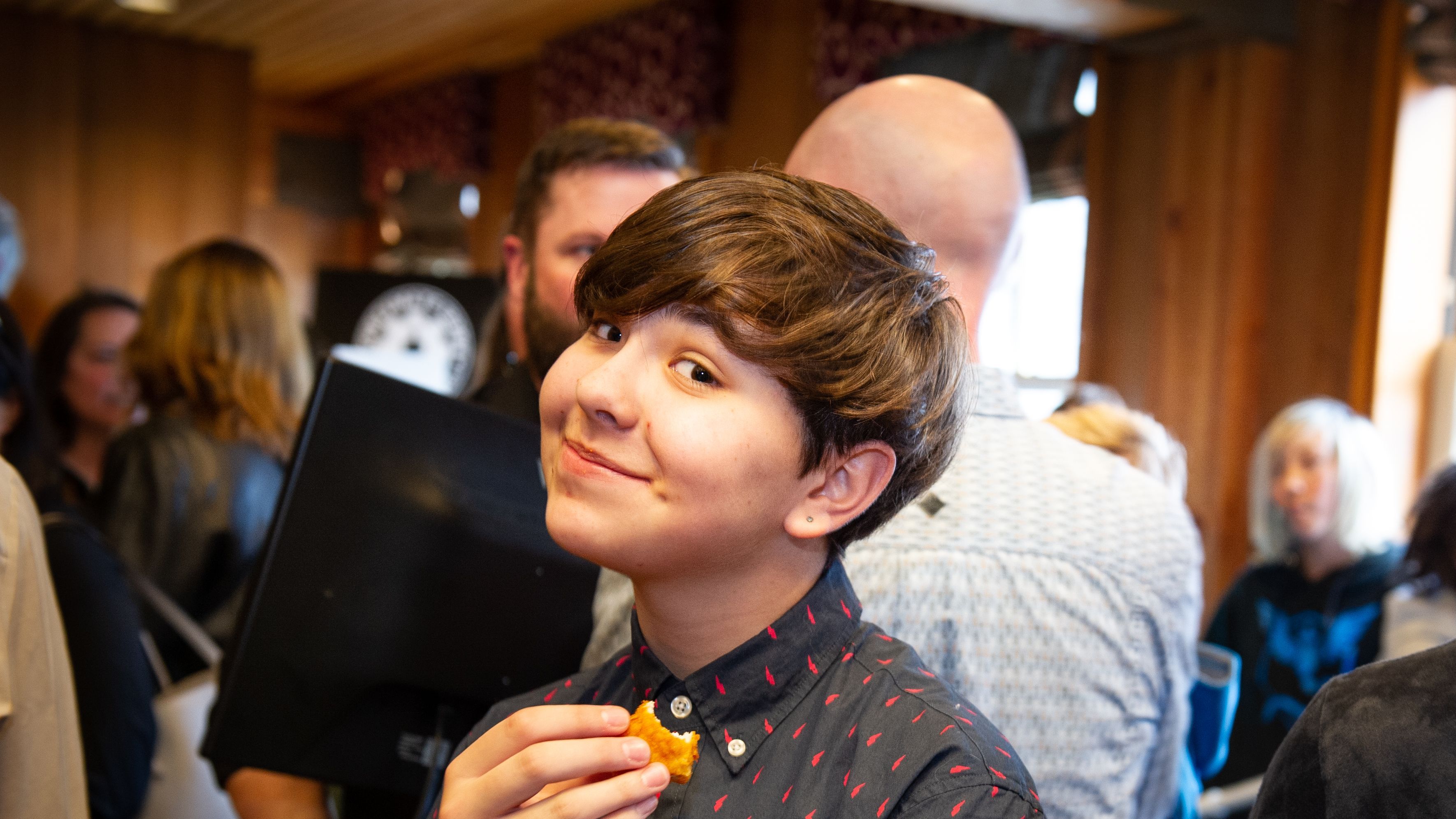 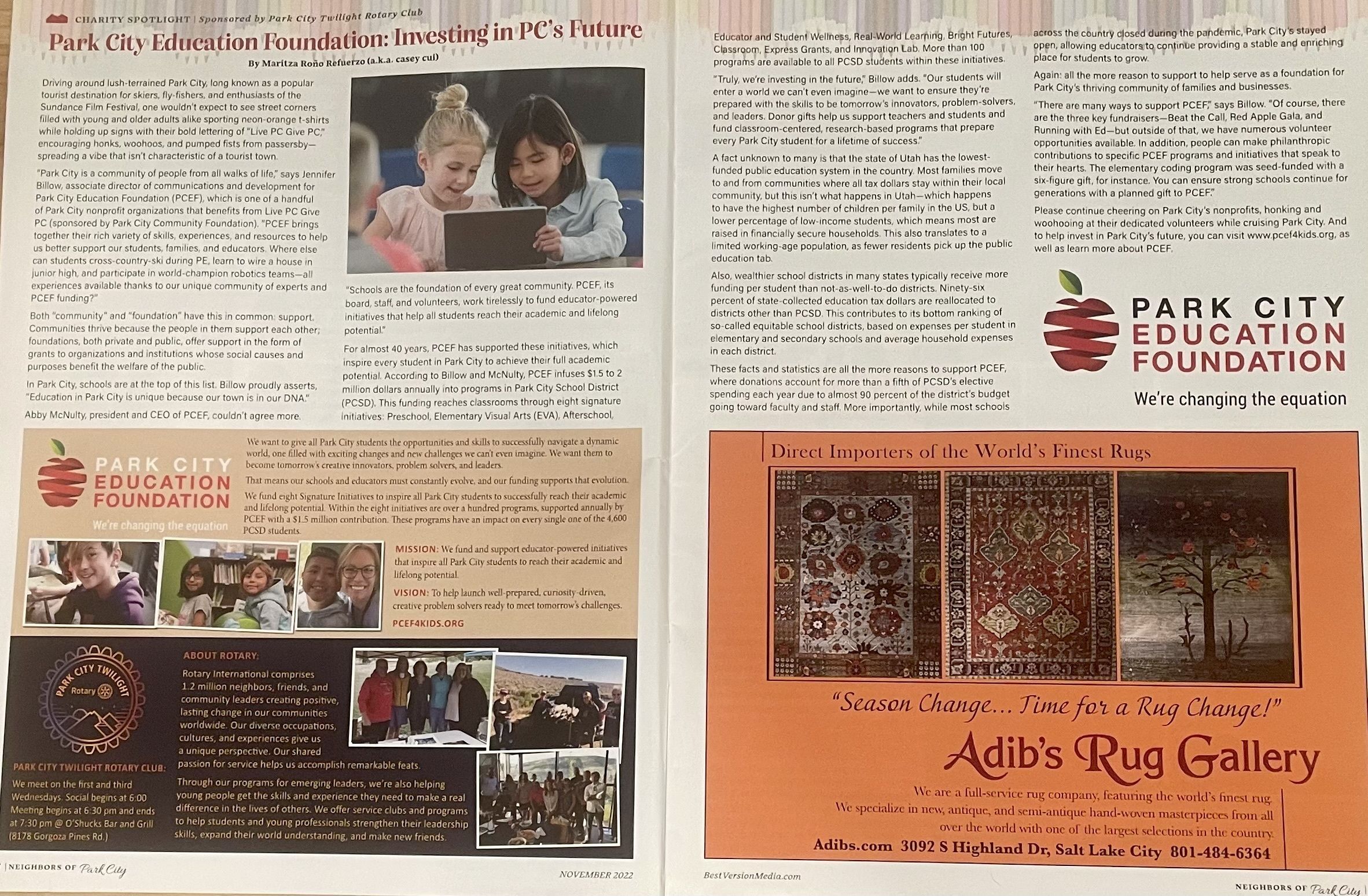 Driving around lush-terrained Park City, long known as a popular tourist destination for skiers, fly-fishers, and enthusiasts of the Sundance Film Festival, one wouldn’t expect to see street corners filled with young and older adults alike sporting neon-orange t-shirts whi8ule holding up signs with their bold lettering of “Live PC Give PC,” encouraging honks, woohoos, and pumped fists from passerby – spreading a vibe that isn’t characteristic of a tourist town.

“Park City is a community of people from all walks of life,” says Jennifer Billow, associate director of communications and development for Park City Education Foundation (PCEF), which is one of a handful of Park City nonprofit organizations that benefit from Live PC Give PC (sponsored by Park City Community Foundation).

“PCEF brings together their rich variety of skills, experiences, and resources to help us better support our students, families, and educators. Where else can students cross-country-ski during PE, learn to wire a house in junior high, and participate in world-champion robotics teams – all available thanks to PCEF funding?”

Both “community” and “foundation” have this in common: support. Communities thrive because the people in them support each other; foundations, both private and public, offer support in the form of grants to organizations and institutions whose social causes and purposes benefit the welfare of the public.

In Park City, schools are at the top of this list. Billow proudly asserts, “Education in Park City is unique because our town is in our DNA.”

Abby McNulty, president and CEO of PCEF, couldn’t agree more. “Schools are the foundation of every great community. PCEF, its board, staff, and volunteers, work tirelessly to fund educator-powered initiatives that help all students reach their academic and lifelong potential.”

For almost 40 years, PCEF has supported these initiatives, which inspire every student in Park City to achieve their full academic potential.

“Truly, we’re investing in our future,” Billow adds. “Our students will enter a world we can’t even imagine–we want to ensure they’re prepared with the skills to be tomorrow’s innovators, problem-solvers, and leaders. Donor gifts help us support teachers and students and fund classroom-centered, research-based programs that prepare every Park City student for a lifetime of success.”

A fact unknown to many is that the state of Utah has the lowest-funded public seduction system in the country. Most families move to and from communities where all tax dollars stay within their local community, but this isn’t what happens in Utah–which happens to have the highest number of children per family in the US, but a lower percentage of low-income students, which means most are raised in financially secure households. This also translates to a limited working-age population, as fewer residents pick up the public education tab.

Also, wealthier school districts in many states typically receive more funding per student than not-as-well-to-do districts. Ninety-six percent of state-collected education tax dollars are reallocated to districts other than PCSD. This contributes to its bottom ranking of so-called equitable school districts, based on expenses per student in elementary and secondary schools and average household expenses in each district.

These facts and statistics are all the more reasons to support PCEF, where donations account for more than a fifth of PCSD’s elective spending each year due to almost 90 percent of the district’s budging going toward faculty and staff. More importantly, while most schools across the country closed during the pandemic, Park City’s stayed open, allowing educators to continue providing a stable and enriching place for students to grow.

Again: all the more reason to support to help serve as a foundation for Park City’s thriving community of families and businesses.

“There are many ways to support PCEF, says Billow. “Of course, there are the three fundraisers–Beat the Call, Red Apple Gala, and Running with Ed–but outside of that, we have numerous volunteer opportunities available. In addition, people can make philantrhoipic contributions to specific PCEF programs and initiatives that speak to their hearts. The elementary coding program was seed-funded with a six-figure gift, for instance. You can ensure strong schools continue for generations with a planned gift to PCEF.”

Please continue cheering on Park City’s nonprofits, honking and woohooing at their dedicated volunteers while cruising Park City. And to help invest in Park City’s future, you can visit www.pcef4kids.org, as well as learn more about PCEF.