The Finish Line is in Sight: Isaac and Lindsay 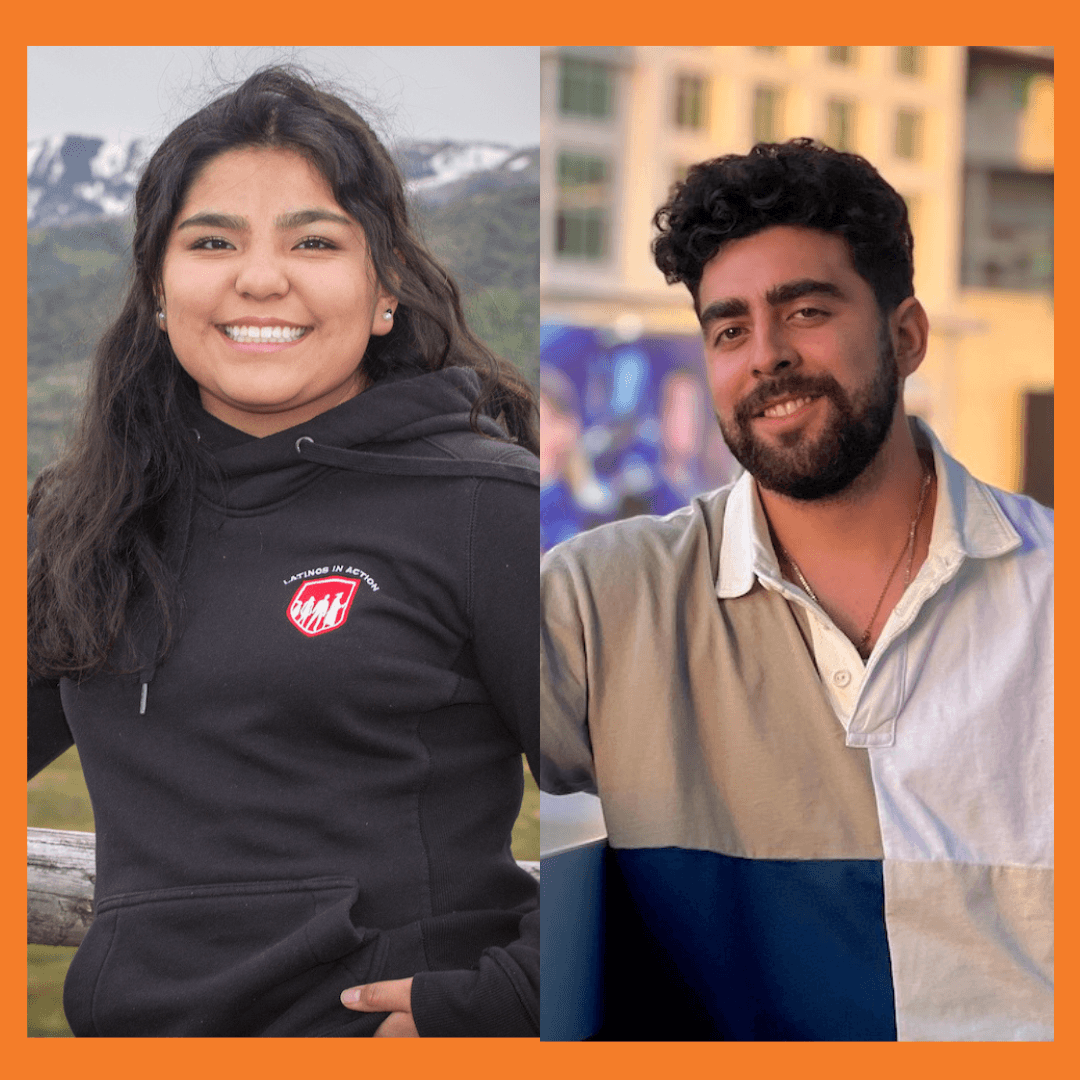 Seven Bright Futures Park City students are preparing to celebrate the greatest achievement of their lives (so far!):

Seven*  years ago, these students started their journey to - and through - college. This May, they will cross the finish line.

PCEF will profile many of the upcoming graduates this year.

Below, what Isaac Cortés and Lindsay Carreto* - who is actually graduating an entire year early - have to say about the ways Bright Futures walked alongside them on their journeys. We're sure you'll be inspired to support all the Bright Futures students through Live PC Give PC! And, if you donate now your gift will be doubled with generous matches!

When Isaac Cortés was a high school senior, he read the letter he’d written to himself as a third-grader.

It read, in part:

I’m proud of you…
You graduated from high school with scholarships - and you got into college.

This spring, Isaac will celebrate: not only did he get into college - but he will also graduate.

That he got in at all, he says, is thanks to his teachers at Park City High School and Bright Futures.

“My parents always told me,” Isaac said, “that I was going to graduate college. I have two older brothers and a younger brother - but they always told me that. And I’m not only a first-gen college student, I’m a first-generation American! My parents came here to give me and my brothers a better life. Before I was even born, they had this goal for me.”

“I didn’t know that I would go to college,” he recalled. “I got rejected from the University of Utah… But lots of my teachers believed in me and told me to apply to Westminster.”

He did - and got accepted. And then, he figured out how to pay for it. Isaac leaned into the financial literacy coaching Bright Futures provided - and earned the financial support to attend.

Now, with a great job offer on the table and a plethora of opportunities at his fingertips, his work is already paying dividends.

Bright Futures student Lindsay Carreto is set to graduate an entire year early from USU this spring. She has worked her way into a similar situation...

“I have a lot of plans - and I have a lot of options, too!” she said. “I will be the first in my family to graduate from college - and that is a big deal.”

Lindsay marveled. “I didn’t even think I was going to be able to go to college, especially in my senior year - I didn’t know how I was going to pay for it.”

Despite the uncertainty, Lindsay felt compelled to work her way through a full concurrent college enrollment schedule her entire senior year at PCHS.

It was then that Lindsay was able to lean on her network of support: Bright Futures, Latinos in Action, and Ms. Anna Williams (who helps run Dream Big at Park City High School), she said, were incredibly helpful.

“Bright Futures helped me figure out how to budget and pay for four years of college,” she said. “And I applied for scholarships - Ms. Williams and Bright Futures always encouraged me to try for a lot of scholarships.”

It turns out - Lindsay only needed to figure out how to fund three years of college… and feeling like her hard work is paying off is something totally new:

“It feels so good and I feel proud  of myself! I worked hard - I’m excited and it’s a good feeling! It’s surreal. It will hit me at random times and I’ll think oh my goodness I’m graduating this year!”

A couple of stutter steps for Isaac - first getting to college, and then as he tried to figure out what he wanted to do in life, wound up paying off big time.

“I had a mix-up and ended up taking a philosophy class. At that point, I was able to start examining my own thoughts,” Isaac said. “And that ultimately inspired me to join the Honors College. Now I’m graduating with honors!”

That fact - after the initial rejection - has a unique satisfaction.

“It feels amazing! I’ve had this feeling of confidence since the end of freshman year,” said Isaac. “I ended with a 4.0 GPA - I know now I am such an important asset.”

For both Lindsay and Isaac - future college grads! - a bit of certainty is very welcome.

BRIGHT FUTURES: A SYLLABUS FOR SUCCESS

After leveling up to Honors his sophomore year, Isaac had to reconfigure finances.

“Bright Futures stepped in,” he said, “and offered me additional financial aid - which was actually the reason I was able to continue school. I had no car, no place to live, and the scholarship helped me - and helped me keep my focus on academics.”

“Throughout all of this, the Bright Futures staff and community have supported me both from a distance and directly, in the biggest of ways to the smallest.” Isaac continued “I understood the help could be financial and academic, but what I didn’t know was that they would be here to personally help me - and I truly appreciate that support. They’re helping me make my dream into reality!”

Lindsay says that Bright Futures support manifested itself in ways big and small for her, too.

“In high school, as a first-generation student, I didn’t really know how to apply for college,” she said. “The technical part of applications and letters of recommendations, budgeting… all of it was a big help.”

The relationships she built with the BF team became something she would rely on throughout her post-secondary education.

“If I ever had a hard time, I know I could reach out – problems with school or ANYTHING - so that was really helpful,” she smiled. “There were a lot of things like, ‘I’m panicking! I don’t know what to do and I don’t know if my schedule is going to work out!’”

And the help was ALWAYS there.

One thing that was key - and really sets Bright Futures apart from any other program - was the consistency for students as they moved to and through college. One less transition turned into a massive benefit.

“LIA helped so much in hIgh school, along with BF. And the fact that Bright Futures is there when you’re in college - it had a huge impact on my well-being,” Lindsay said. “It’s one thing to get to college and another thing to get THROUGH it.”

“Having that foundation with them already and those relationships - it was so helpful because I knew they were there if I needed them.”

Isaac plans to get to work after he graduates. He has a job offer in public relations for a bank in Salt Lake. He also wants to earn an MBA, but he wants to do it in a measured way.

“I may graduate, work two years, then start the MBA. I love writing, video, music, animation, and graphic design… which I’ve learned all intertwines in PR. My ultimate goal is to own a media production company and communications firm.”

Along with that relief comes the pull to give back…

“I am a firm believer of the universal law of compensation - I’m making it really clear - there is NO WAY that I would have been able to get to college without the support of Park City and Bright Futures,” Isaac said. “When I’m in a position to - I want to help inspire other individuals like myself - to be part of that.”

As for Lindsay, she’d love to be more involved with Bright Futures, too. Graduating a year early gives her a chance to work before she goes back to school for her Master’s.

And while she wants to become a therapist focused on adolescents, she has a pretty big affinity for the group that walked alongside her as she worked to get where she is today.

“I love connecting with the BF students - I already connect with them,” she smiled. “It’s fun talking to them and letting them know what college is like. Hearing someone’s experience REALLY makes a difference - and I’d love to share my experience.”

As graduation day approaches, Isaac recently wrote another letter. This one, as a college senior. This one - to transition him into the next phase of his life.

“I submitted my graduation application. I shed a tear - this has been such a great experience. I’m excited to find out what life is going to be like for me.”

We're sure you'll be inspired to support all the Bright Futures students through Live PC Give PC!

And, if you donate now your gift will be doubled with generous matches!