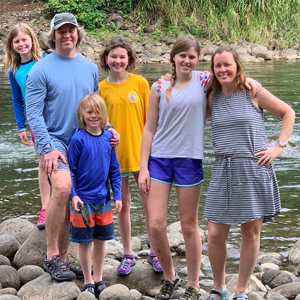 Kim Abbett originally grew up in Texas, and in 2016 her family moved to Park City.  She and her husband Mark came with her 4 children to ski for the winter and ended up staying. Lilian, Amelia, Scarlet and Oliver currently attend at Parley’s Park Elementary, Ecker Hill Middle School, and Treasure Mountain Junior High.

At Purdue University Kim studied chemical engineering and earned a BS degree. During her junior year she studied at Hannover University in Germany. She then attended graduate school at the Georgia Institute of Technology.  There she received her Masters in 1998 and PhD degree in 2001 in chemical engineering with a minor in graduate level economics.  She studied German and Spanish during all of her studies and has worked in both Spain and Germany.

After graduation from Georgia Tech, Kim moved to Nashville, Tennessee, where she worked for DuPont worldwide for several years. She then moved up to northwest Indiana to raise her children where she served on several nonprofit boards.

Kim is currently serving at several schools as Treasurer of Parley’s Park Elementary, Secretary at Ecker Hill Middle School, and Grants Committee Chair at Treasure Mountain Junior High.  She is involved in the Summit County chapter of the National Charity League where she is the liaison for Peace House.

Kim first became involved with Park City Education Foundation through being an ambassador for Parley’s Park Elementary.  She feels what PCEF does for our community is important, and she is happy to serve on the board.